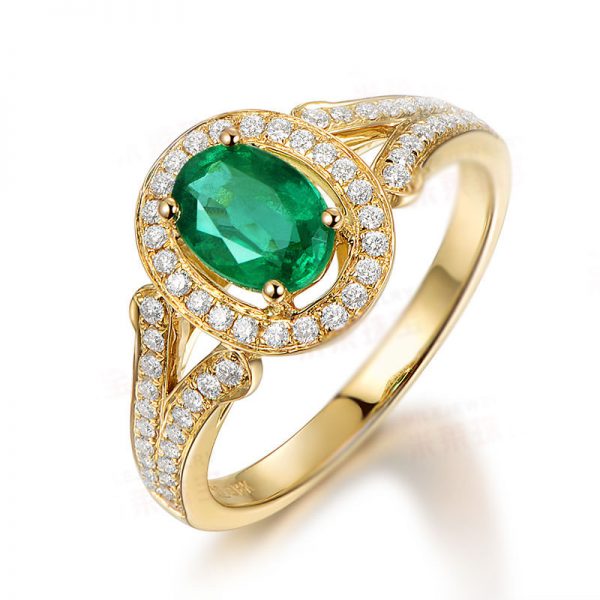 Emeralds are the most precious stone in the beryl group, which also includes aquamarine and golden beryl, and comes in a rangeof shades from light grassy green through to deep, rich bottle green. They are considered one of the ‘precious four’, the others being sapphire, ruby and diamond. Once cut and polished, emeralds have a vitreous lustre, and whilst clarity is important, inclusions are tolerated – more so than in any other gem, and often considered part of the character of the stone. Emerald jewellery has long been desired and cherished.

Brazil and Zambia produce most of the world’s finest emeralds and are valued for their clarity and colour; however, other South American countries, and Europe, are discovering new deposits of high quality emeralds.

The name emerald is believed to derive from an ancient Persian word that translated to the Greek as Smaragdus, meaning ‘green stone’.

Due to possessing the same colour as the fertile, crop covered banks of the Nile, Egyptian pharaohs regarded the emerald as a gift from the gods, especially Thoth, the god of wisdom. It symbolised spring, rebirth and eternal life. Papyrus scrolls have been found depicting Cleopatra wearing green stones, thought to be emeralds, and many mummies were buried with an emerald around their neck in hopes of bringing them eternal youth.

In South America, Incas and Aztecs believed the gem to be holy, and the Vedas, the holy scriptures of the Hindus, claimed that they had healing properties, and brought good luck and well-being to the wearer of emerald jewellery. The treasure chests of Indian maharajas were often found to be full of emeralds, whilst Turkish sultans lavishly adorned crowns and daggers with the gems.  Her Majesty, Queen Elizabeth II has in her collection, the “Cambridge and Delhi Dunbar Parure”, a fantastic suite of emerald jewelry which includes a stunning emerald diadem.

Emeralds are thought to hold healing powers, both emotional and physical. It is believed that they can lift depression, cure insomnia, detoxify blood, and cure ailments of the heart, immune system and eyes. Stemming from this, they are also thought to bring great vision and intuition to the wearer, increasing the ability to foretell the future, and reveal truths. An emerald can revive passions, and to call back a distant lover, speak the words you wish to say whilst holding the gem close to your lips, then seal it in an envelope; it can come in handy when defeating enchantments and spells, too.

They are the birthstone for May

We have an amazing range of exquisite emerald jewellery, including pendants, rings and earrings.